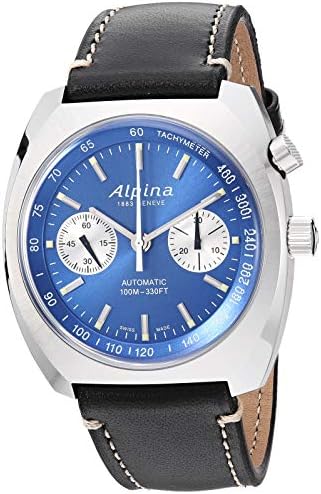 
Inspired by Alpina’s 1970 iconic design, the Startimer Pilot Heritage Chronograph model features a barrel case design, screw down crown and automatic chronographic movement. This model has a black leather band with a classic pin buckle and blue dial with two silver sub-dials. This classic watch has an automatic movement and has an engraved closed caseback to protect the movement of everyday elements. Aviators, sportsman and corporate movers will appreciate the precision, reliability and style of the Startimer Pilot Heritage Chronograph.

Founded in 1883 by Alpinist’s that wanted to make the most robust watch for the outdoors, they made the first anti-shock, anti-magnetic, stainless steel & waterproof watch. With more than 135 years of watch making, Alpina’s mission is to design and engineer quality luxury sport watches that operate with the greatest precision and reliability possible in the most demanding sport environments. Alpina manufactures its watches in Geneva, Switzerland.

In 1921 Alpina became the official supplier of time instruments for military pilots. They have continued in this strong aviation history with the Startimer collection. Aviators, sportsman and corporate movers will appreciate the precision, reliability and style of the Startimer. Customers can choose between models with Swiss Quartz movements and Swiss Automatic movements.

The Pilot Watch for Aviators, Sportsman and Corporate Movers

The Pilot Heritage Automatic GMT models are inspired by the originals from the 1970s with the iconic barrel case design, pop of orange color with the second hand sweep and internal turning 24hr bezel.

The Pilot Chronograph Date (not displayed) has an AL-371 Swiss Quartz movement features 3 counter displays, Arabic and stick markers, date and day of the week, 3 pushers, an engraved caseback and 42mm case

Đánh giá
bởi R.
This Alpina watch from the Heritage Pilot collection lives to the rhythm of an AL-727 automatic movement of great precision. Its robust stainless steel case 42 mm in diameter, 13 mm thick, gives it an “Old School” look that will appeal to fans of neo-vintage timepieces.On the back of the case, there is an interesting engraving: a stealth plane flying over a mountain, reminiscent of the Swiss origins of the brand; this drawing comes to imply the slogan “Alpina 1883 GENEVA”The very straight lines of the hands and indexes reinforce the retro style of the watch. As for the colors, the contrast between the blue of the dial and the silvered bezel make the design of the original case and paradoxically very current.The legibility of the indexes and hands is accentuated by a Luminova treatment; a non-radioactive and phosphorescent component making the reading of the time legible, even in the darkest recesses.The appearance of this automatic watch is deeply marked by two characteristics that make it special:– The sapphire crystal, made in Switzerland, is both domed and reinforced. We also find the engraving at the bottom of the case mentioned above.– The double crown of the Startimer gives it an innovative design and ensures a seal at 100 meters (10 ATM) of the product. The first crown located at 2 o’clock allows the adjustment of the internal telescope. The second, in turn, has the classic function of setting hours.The bicompax chronograph, with sub-dials at 3 and 9 o’clock, is used to measure short time intervals (30 minutes) with the precision of the AL-727 caliber. This new movement, made especially for the Startimer, has a 55-hour power reserve which is fully 45% more than its predecessor.At 14.75mm thick, the Startimer Pilot Heritage Chronograph is not exactly thin, but it’s right in line with other automatic chronos at this price point, and a good chunk of that height is taken up by the crystal. It’s worth pointing out that despite the vintage-inspired appearance, spec for spec, this is a proper purpose-driven sports watch, with 100 meters of water resistance and plenty of lume for legibility in all lighting conditions. It has a feature that’s rare at this price point: a mono-pusher mechanism. Based on a movement designed by La Joux-Perret, the single pusher on the right case flank gives the Startimer Pilot Heritage chronograph a distinctive look and some added functionality with start, stop and reset all controlled by the same button. The most critical reason is that with only one pusher, there is basically zero chance of user error causing a malfunction to the somewhat delicate chronograph mechanism. With a traditional two pusher chrono, hitting reset while the chronograph is engaged could, in theory, damage the movement. That’s not a problem with a mono-pusher — it’s impossible to “start, stop, reset” out of order since only one button is used. By the same token, you can’t temporarily halt the chrono and pick up where you left off. It just goes to show that there are always trade-offs in watchmaking. But all that aside, it’s also just really cool, akin more to a classic stopwatch that gives it a pleasing neo-vintage charm.This watch is now a part of enthusiast-focused chronographs near the $2500-$3000 mark but offers something unique with its mono-pusher design, making it a compelling choice if you’re after a robust and sporty chronograph with a healthy dose of wrist presence.
bởi Hairy Potter
I have been acquiring a somewhat extensive collection of high-end watches, which includes six Alpina models.  This Startimer Pilot Heritage is my favorite of the six.Immediately upon opening the box, the quality and care put into this timepiece was evident.  The watch is substantial and flawless, and the magnificent blue color immediately caught my attention. It operates with perfectly smooth precision.  I have to admit, I've never actually used the chronograph functionality on any of my watches; however, there is something about this style that I find very timeless and attractive. This watch is not quite as versatile as some of my others. I would not choose it when I am dressing up for a formal evening or special occasions.  However, for casual or business wear, it is always a perfect choice and it always turns heads.This timepiece should also last for many, many years without damage, since it is constructed to be extremely resistant to scratches, shock, and extreme temperatures.I cannot recommend this watch highly enough!