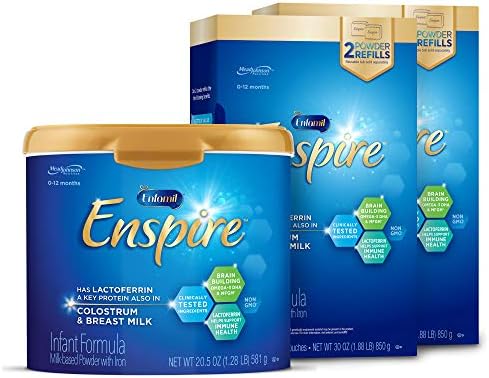 
Enfamil Enspire Baby Formula with iron is an inspired way to nourish. Enspire has MFGM and Lactoferrin for brain support, two key components found in breast milk, making it our closest infant formula ever to breast milk. Lactoferrin is a protein found in colostrum and breast milk that provides immune support and intestinal development, and MFGM has been shown to support mental development. Enspire is a non-GMO milk powder baby formula that is designed to provide Complete nutrition, with omega 3 DHA, Choline, and our proprietary blend of probiotics, for babies through 12 months. Not made with genetically modified ingredients, but trace amounts of genetically engineered materials may be present in the product from manufacturing environments and process sources. QuintilesIMS, using the ProVoice Survey fielded from Janurary 2017 to December 31, 2017.